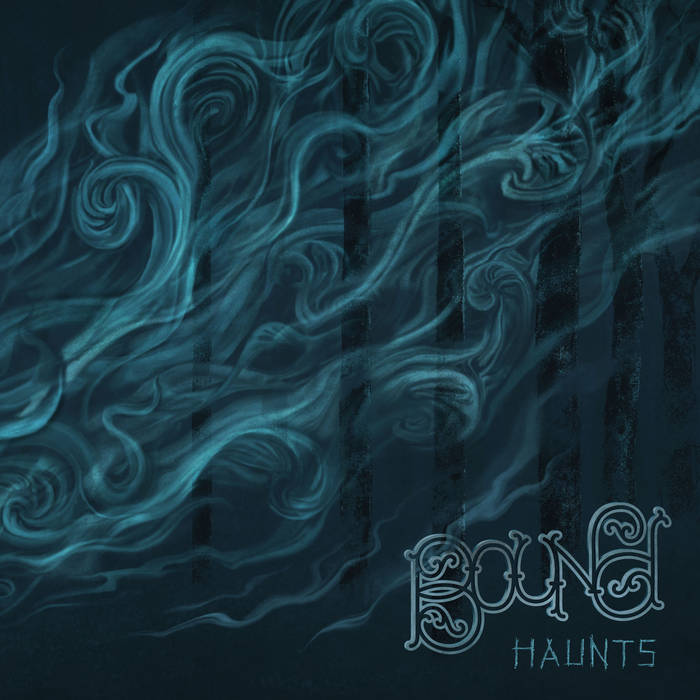 thegreatzimm I’m hooked. Great arrangements. A soundtrack for our times. Favorite track: The Last Time We Were All Together.

birdistheword Where am I, in the motional setting & feedbackdriven dreamsphere in Dan Swanö's first Nightingale "The breathing shadow"? But here and there a famous anarchic Satyricon-battery... but most of all Leipzigs Dark Suns - how paradox! Bound's staying unique with this melange.
I was never there, Bound is a reason, because -one last more comparison- Reykjavíks Kontinuum & british Anathema shake hands in Washington DC. A compendium of melancholic rain drops... Holy moly, huge...

For those who linger

The night of the full Harvest Moon.
The start of the haunting season.

via Jetsam-Flotsam and Diehard Skeleton Records

"Washington, D.C.’s Bound appeared to come out of nowhere in 2018 with No Beyond, an album so fully-realized that many observers noted it’s hard to believe it could be a debut. In truth, the band members had long toiled together in secret to create what the Washington Post called 'a solemn, spacious debut forged inside a circle of trust,' PopMatters called 'impressive and ambitious,' and Orlando Weekly called 'practically post-everything…a complex fog of slow-breath mood and bottomless, elegant melancholy.' Deftly melding elements from shoegaze, post-rock, doom, goth and more into something greater than the sum of its parts, No Beyond seems to emerge from a mist. Their sophomore effort Haunts, on the other hand, seems to rise from the very ground.

"Haunts shows the considerable expansion of the band’s conceptual foundation in the two years since No Beyond. Thematically, it’s an exploration of place, in both a tangible and abstract sense. Sonically, its staggering beauty and surprising accessibility belie a dark heart and a constant inclination toward the off-kilter.

"Presented as a series of vignettes in one unbroken, circular composition, the album tells deeply personal, often disquieting stories of places where formative life events occurred – and the pull that those places still exert. Further rooting the songs, each is marked with sounds of objects taken directly from its origin. In some cases, these were brought to the studio and worked into the recording; in others, the recording itself was done at the source of inspiration. The point, however, isn’t really for the origins to be revealed. Rather, it’s to strengthen the sense of place for the artist, and in turn invite the listener to create their own connections rooted in their own experiences.

"There’s a deepening and multiplying of the sonic roots put down on No Beyond. On the whole, Haunts is simultaneously more muscular and more experimental. Its dense, baroque arrangements and aural easter eggs reward repeated listens. And while the '-gaze' and 'post-' influences seem to remain, Bound’s approach to any genre element is undeniably singular. There’s a soft-loud dynamic that almost melts together, becoming a hypnotic force that envelops and holds you. The ethereal quality of the vocal harmonies, layered guitars, and subtly ever-present synthesizers swirl together in spellbinding fashion, united by a rhythm section that patiently yields the way when called for and bursts forth explosively when the time is right. Somehow, amid layers of sound often so otherworldly, you can almost smell the dirt, taste the blood, and touch the pavement.

"One of the striking things about Bound – something that has distinguished them since first releasing No Beyond – is their ability to grasp the value of patience in songwriting. The compositions never insist upon themselves; instead, they display an impressive confidence, a willingness to take the appropriate time to build and bloom into something truly stunning – or unsettling. It’s because of this that Bound’s music is able to have a darkly angelic, impressionistic quality while maintaining an accessible clarity, both in sound and purpose.

"Haunts represents the next step in Bound’s creation of their own distinct canvas, one that’s both boldly unique and remarkably approachable. And like the formative places and ghosts of the past that built these songs, it will stay with you long after it’s over."

All music written and performed by Bound

The sound of everything rushing back at once, receding as fast as it came, and leaving more to linger. The story of how we're bound, for better or worse.

Bandcamp Daily  your guide to the world of Bandcamp